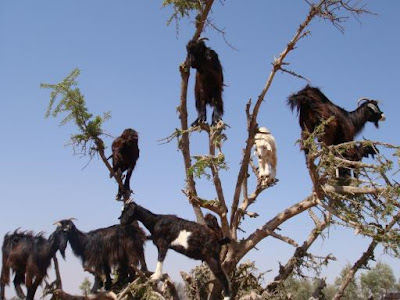 The adventure continues…… We are still in Morocco. We were wondering what was going on, when we took a sharp turn and saw a tree full of … goats! Earlier in the day we had seen a picture of this very sight on a postcard, but found it nearly unbelievable to see it in “real life”! It was such a bizarre experience to see goats in a tree…… Our documents were checked and noted for our own security at every police checkpoint. These stops were of course always a good time to ask extra questions…. just out of curiosity. Since I usually answered most of the questions, they often pointed at Sander asking “Is he your son?” (ha- ha- ha), and if so “Why does he not speak French”?

The traffic signs warned us to be careful for (crossing) camels. Sure enough, we saw them regularly in the distance, but also closer to the road. We stopped once to take pictures of a group, and after they became accustomed to us, we could approach them quite close.

The day also had several beautiful nature moments. As it happened, I was present when a newborn lamb was taking its first feeble steps. The mother sheep looked a bit cautiously at my camera and wasn’t sure whether or not to take a defensive stance to protect her lambs, for the sound of the shutter scared her babies.

After a good night’s rest and a nice breakfast in Laayoune ; we drove on. The vegetation became sparser, as we got closer to the Mauritanian border and our surroundings continued to change with fewer cars and rising temperatures.

Lunching at a local fishing enterprise resulted in some beautiful pics. It’s hard work to get the boats out into a rough sea and to get them back to shore; machines (tractors) and manpower worked together to get the job done. I was asked jokingly if I wanted to accompany the fishermen for a while ? No?! Then, surely we had some wine or whiskey to hand out (they kiddingly asked)? 🙂

We stopped for the night about 50 km before we reached the border with Mauritania. While here we were able to take care of insurance for the cars. While the men filled the gas tank for the 8th time, my eye was drawn to a Hilux full of tied-up dromedaries. Each time a seller/buyer approached the car, the animals started roaring. A roaring hungry lion spotting his prey sounded almost less loud than the dromedaries. Later on I understood what was going on, because I learned that at the end of the ride they are all pushed out of the car; head first, and I think that must be quite painful!

That evening I felt really conspicuous. While enjoying a pizza, I saw that I was the only woman for miles around. Would there be a special reason for that?

After a good night’s sleep, we got up extra early to head to the border. Upon arrival at around 7: 45 am, a large queue had already formed, because many had spent the night at the border. When the border opened around 9 AM, a man with a whistle cycled by the row of trucks; it was a very creative form of a “wake up call” :).

We assembled some breakfast from the back of the car and prepared … to wait, but for how long? No one could tell us exactly and only time would tell. Would it be possible to enter Mauritania in a reasonably fast and easy manner? To be continued!

The adventure continues…… We are still in Morocco. We were wondering what was going on, when we took a sharp turn and saw a tree full of … goats! Earlier in the day we had seen a picture of this very sight on a postcard, but found it nearly unbelievable to see it in “real life”! It was such a bizarre experience to see goats in a tree…… END_OF_DOCUMENT_TOKEN_TO_BE_REPLACED

Het is alweer even geleden dat we voet op Nederlandse…