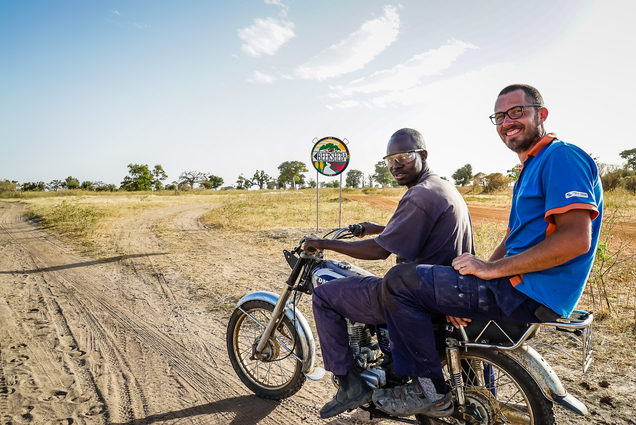 I first saw it on the flight coming in; our plane was banking in a turn over Dakar, and I looked out the window to see a particular structure set atop a hill on the coast: the African Renaissance Monument, meant to be a symbol of a resurgent Africa, ready to shape its own destiny in the 21st century. Powerful words, considering that throughout the previous century, no other continent has been so much a pawn in the hands of others as this one; be it colonization, civil wars, government corruption, or climate changes, the history of Africa has been, and still is, a troubled one. Yet, at the same time, the potential for the rise that the monument is meant to symbolize is there, something that became abundantly clear to me during the three weeks that I spent in Senegal.

Staying with my uncle, Anco, his wife Ewien, and a number of their friends and colleagues in M’bour for three weeks, my father and I got to see first-hand the progress that is being made. Though we visited a number of project sites, the focus was largely on the Beer-sheba project, a school, church, and farming community where, to my understanding, young people from churches around Senegal are nominated to live and work for a time, picking up essential skills in the process. It’s education in faith and life, and while I won’t make a secret of my skepticism of the former, it’s clear that the people working in and running the project are providing something that will be sorely needed in much of Africa if the promised rise out of poverty is to materialize. In doing so, they are providing hope and improving the lives not only of the students learning how to grow crops in an environment increasingly threatened by desertification, but also to the communities to which those students will return after their stay in Beer-sheba comes to an end. Lives are changed just by teaching people how to provide themselves and others with a stable food supply, a testament to how much of a difference even basic education can make to a people whose poverty generally prevents them from getting one. It helps to unlock their potential, and potential is one of the few things that is present in abundance even in the poorest areas of Senegal.

I read a library book on Senegal before my trip: it presented it as one of the more stable and developed countries in Africa, and in some ways it’s right; Dakar is a commerce center for much of West Africa, and with its well-paved roads, modern looking buildings, and advertising bill-boards, much of it does a good impression of a modern, western city. Senegal also hasn’t suffered the destructive civil wars and unrest that plague many of its neighbors, and the government has many international aspirations. However, much of it comes off as a façade, and one that’s cracking at the edges: modern-looking structures and vehicles are poorly maintained, and people are still living in abject poverty not more than a mile away. It seems like the country is trying to run before it can walk, modernizing and trying to become more and more of a world player in spite of the fact that much of the population is getting left behind in the process. Allegations of government corruption, some of which ironically target the statue meant to represent the rise of the country and the continent above the shadows of the past, don’t help; it only adds to the impression that the resources the country has are being used only to the advantage of the rich, with the rest of the population left to fend for themselves.

Senegal cannot escape the fact that, if it is to truly fulfill the aspirations of the monument crowning Dakar, it has to invest in bringing up the entirety of the population. Programs like Beer-sheba are showing the way, led by a small group of visionaries and driven individuals who are not only using their own talents and ingenuity, but also inspiring others, spurring them on and giving them the tools to create a brighter futures for themselves and generations after them. I had the privilege of getting to see and experience parts of that process, and even to leave a small personal mark in the form of a new sign to point people towards the place, one of many where the groundwork of the real African Renaissance is being laid.